It is not a very well-known species and it certainly is not very well-studied, but the Arctic wolf (or Polar wolf) is, in many eyes, among the most majestic and symbolic creatures on Earth. Canis lupus arctos inhabits the difficult-to-access arctic regions of North America and Greenland, which gives it moderate protection from hunting and overexploitation in comparison to its cousins living farther south(1). Because the Arctic wolf is so insufficiently researched and documented, due to its extremely elusive nature, we know very little about the folklore and mythos surrounding the animal. The tales about wolves in general, however, are quite interesting; Fenrir of Norse mythology was a wolf-like monster born to the god, Loki and the giantess, Angerboda. The gods feared the dangers and evils posed by Fenrir and determined to bind him with a chain made from the sound of a cat’s footsteps, the beard of a woman, and the breath of a fish, along with a few other odd ingredients. After biting the hand of the Tyr, the god of war, law, and justice(2), Fenrir was sentenced to lie on a rock until the Ragnarök (or doomsday), at which time he will destroy his chains and deliver his fury upon the gods. It was thought that Fenrir would then consume the Sun and devour Odin, chief of the gods, only to be stabbed by Vidar, son of Odin, to avenge the death of his father(3). 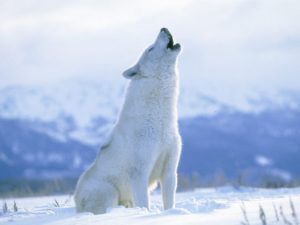 Just slightly smaller than the iconic Grey wolf, the Arctic wolf can measure in at almost 6 feet long, tail to nose, and weighs anywhere from 70 lbs to a whopping 175 lbs(1)! Its stunning white coat is one of its key characteristics that place this wolf among the most majestic of animals, and its deep, eerie, and unsettling howl only adds to the wolf’s rank. The Polar wolf’s diet is comprised mostly of hares, muskox, and the more stereotypical, yet minor portion of its diet, caribou(4). However, as these prey become sparse over the course of a year, the wolves will gladly feast on various mice to tide themselves over.

In stark contrast to many other wolves, the Arctic wolf is not facing significant hunting and poaching risks, as it rarely comes in contact with humans. There was a time when many locals and foreigners, alike were hunting these wolves in retaliation to the decline in the caribou population (presumably the wolf’s doing) until it was discovered that humans were the ones driving the caribou towards endangerment with overhunting. Farley Mowat shares his story of researching this issue in his book Never Cry Wolf, which can be found under the “Reads” page. The Arctic wolf’s most pressing threat is, of course, the vengeful wrath of climate change. The muskox and Arctic hare have lost a significant portion of their recourses due to extreme weather conditions over the past few years, driving them away and thus making the wolf’s search for food ridiculously difficult. This does lead to the wolves targetting more caribou, one of their only remaining food sources, which will likely drive the caribou towards some level of endangerment. This could result in more hunting of the wolf, further driving this situation towards a very slippery slope(4).

Another threat to the Arctic wolf is habitat fragmentation, as roads, pipelines, mines, residential areas, and other industrial developments make their way into the Arctic. This process disrupts the wolf’s roaming and hunting territories, making it both dangerous and difficult to search for food(4).

The Importance of the Arctic Wolf

As with all major preditors, the Arctic wolf is absolutely vital when it comes to controlling the population of its prey. Without this creature, the caribou and muskox population would skyrocket, wreaking havoc on the integrity of the Arctic plains. The Arctic hare has many predators but it would nonetheless see an increase in population, over-munching on undergrowth and larger plant species ranging from small woody plants (namely Willow) to various mosses and lichens. Perhaps the loss of such a beautiful creature is, in itself why the Arctic wolf is so important.

On the to the juicy stuff! With so much negative coverage on social media and news sources, it can be hard to remain hopeful about these issues, but there is always something we can do to make the world a better place! Because of the wolf’s remote habitat, there is very little than an individual can do to help. Luckily, the World Wild Fund doesn’t rest and they put your donations to good use! WWF is working with communities, governments, and businesses to preserve the Arctic’s incredible biodiversity; Arctic wolf and all! You can take action on this or donate directly to WWF at the WWF Take Action Center. By working together, we can protect countless species and natural wonders, including the amazing Arctic wolf! What do you say?