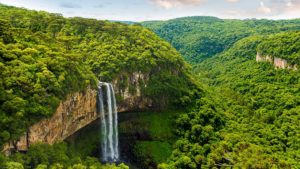 Boasting land twice the size of India and maintaining the title of the largest rain-forest on earth, the amazon is perhaps one of the most critical aspects of our environment. It is home to ten percent of all known species and it accounts for fifteen percent of earth’s river discharge into oceans. However, despite the obvious concept that this forest is taking a lot of carbon from the atmosphere, there is also the risk that, as this forest is destroyed, the forest’s 140 billion metric ton carbon collection will be released right back into the atmosphere(1). As one could imagine, this would have detrimental implications on climate change, but we’ll get to that in the “Importance of the Amazon” section. The name “Amazon” is said to have originated from the Francisco de Orellana war, in which the women of the Orellana tribe fought alongside the men. Thus, the Orellana women adopted the name of the Amazonas from Greek mythology(2).

As previously mentioned, the amazon covers land twice the size of India, about 2.6 million square miles, 2.4 million of which is covered by rain forest, comprising half of the world’s tropical rain forests. In fact, it is so large that it spans over eight countries: Brazil, Bolivia, Peru, Ecuador, Colombia, Venezuela, Guyana, and Suriname(1). Having likely developed during the Eocene era, the Amazon has existed for approximately 55 million years, and remained savanna-free until the current ice-age, when the climate became far dryer(2). One might visualize mighty rivers and tropical forests when considering the Amazon, but there’s far more to see than this. The Amazon encompasses rain-forests, seasonal forests, deciduous forests, flooded forests, and savannas(3).

There are seven major threats posed at the Amazon. Primarily — you guessed it — deforestation. Ranching/agriculture, over-fishing, bio-piracy/smuggling, poaching, damming, logging, and mining have been doing a number on the Amazon’s ecosystem for decades(4).

Agriculture (mainly soy and cattle farming) requires a great deal of land to be taken from the forests and this demand only grows as larger industries displace smaller farmers, driving them deeper into the forests. In fact, cattle occupy 80% of the Amazon’s deforested landscape, and agricultural runoff still contaminates the rivers(4).

Over-fishing is an unfortunate side-effect of food production in the Amazon, as fish is a main ingredient in Amazonian diets. When large fishing industries come to the Amazon they often use large nets capable of hauling up entire schools of fish. It is worth noting that up to 60% of these fish are lost to spoilage(4).

Bringing in roughly $20 billion annually, bio-piracy and smuggling was reported in 2008 to be one of the most lucrative illegal industries in the market next to illegal drugs, human trafficking, and arms trafficking(4).

Poaching has taken up to 23.5 million animals per year to be used for food, materials, and various finished products(4).

Contrary to common belief, damming and hydroelectric power in the Amazon has a devastating effect not only on the aquatic ecosystems, but also a portion of the forests, local basins as they become flooded, and the many locals who were required to relocate due to construction and safety needs. The rivers powering these dams also run the risk of poisoning from oil and chemicals spills(4).

The effects of logging are fairly obvious and simple, but have proven themselves to be some of the greatest threats to the Amazon and to forests across the globe. Not only is there the loss of habitat and endangered plant life to be concerned about but the loss of root systems causes soil to erode and spill into the nearby waters as it smothers aquatic life and contaminates the rivers. An estimated 600,000 square kilometers (232,000 square miles) have been unsustainably logged since 1970(4).

Mining might rarely be thought of when considering threats to a rain-forest, but mining operations require new roads that make for easier access for loggers and poachers; produce chemical waste that infects rivers; and destroy landscapes that are extremely difficult to restore(4).

The Importance of the Amazon

As mentioned, the Amazon is a major hub for the world’s biodiversity, without which the ecosystem would whither and die. And holding hundreds of endangered species, the Amazon serves as a lifeline to many forms of life. What’s even more important though, is the carbon-capture properties of the rain-forest. Trees act as Earth’s main line of defense against climate change (along with algae) in that they absorb CO2 and produce oxygen, something we all learned in elementary school, and the Amazon rain-forest has accumulated about 86 billion tons of  CO2 over its 55 million year lifetime, adding up to one third of the world’s carbon stores(5). However, not only is the forest life-saving in this regard but it is also life-threatening if destroyed. As the forest is cut down and harvested every bit of those 86 billion tons of carbon is released straight back into the environment. Some goes straight to the ground, some finds its way to water, and some gets released into the atmosphere. The key concept here is that, with this amount of added CO2, climate change would become an immediate problem; a problem that might get too extreme to be fixed. That is, if we cut down the rain-forest.

The Amazon is nature’s power house, mediating a majority of environmental disputes, so to speak. Without it there won’t be much opportunity to help restore the environment and Earth may slowly transform into the kind of hell that Venus became, due to its own runaway greenhouse effect. But don’t panic, there’s plenty that we can do about it!

When purchasing any wood or paper-based products, check the label or the website to find out what kind of tree it is made from. Many products in the US are made from endangered tree species found in the Amazon, such as the Big-Leaf Mahogany. As the World Wildlife Fund puts it “Big-leaf mahogany, a severely threatened species found in the Amazon Basin, is more at home in a rain-forest than in your house.”

Also watch out for the kind of pets you buy. Be certain that you aren’t taking an endangered Amazonian species of fish, lizard, or bird, etc. into your home. Again, they’re much better off where they came from. It’s not always easy to know these things, so do plenty of research when purchasing anything about which you might have any suspicions. A single animal or tree can go a long way!

As always, consider a donation to the World Wildlife Fund. They’re doing impactful work in politics, conservation, and education to protect the Amazon and to preserve its wonders, mysteries, and wide variety of benefits. 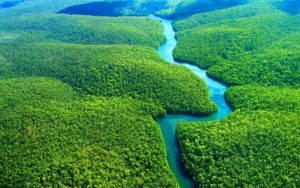