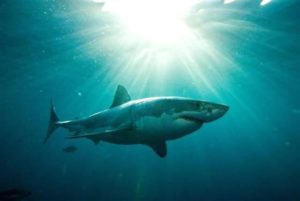 In a world with over 1,000 different shark breeds (1), a single post to cover them all would simply be irrational. Instead, let’s focus in on four of the most critically endangered breeds: The hammerhead, the whale shark, the great white, and the natal shyshark (2). There are other breeds that are in greater danger than these but we’ll look at these instead because, together, they flawlessly represent the different outlooks on this species as well as the nature of the shark.

Before delving into the descriptions of these sharks let’s check out some of their history. There are three major Greek mythologies surrounding the shark. The general theme? Punishment. It was said in the myth of Lamia that Lamia, daughter of Poseidon, the sea god, had an affair with Zeus, the king of the gods. When Zeus’ wife discovered this, she stole and killed all of Lamia’s children. As revenge, Lamia had Zeus turn her into a shark-monster so that she could kill and eat the children of others as revenge against Hera (Zeus’ wife). In the tale of Cetus, Andromeda bragged to Poseidon that her daughter was more beautiful than his own, after which he released a shark-monster named Cetus to kill her. However, when Perseus intervened, the monster of Cetus was destroyed. Similarly, in the myth of Akheilos, the son of Zeus boasted that he was more attractive than the goddess of beauty, Aphrodite, and was therefor turned into a shark as punishment(3). As for their timeline of existence, the general species of the Shark has outlived the dinosaurs at the stunning age of 400,000,000 (four hundred million) years(1). 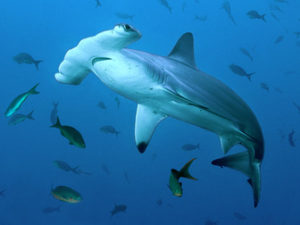 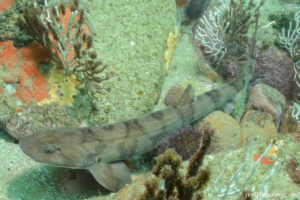 Great White: As what is, perhaps, the most well-known of the shark breeds, the great white holds a certain reputation as a killer that it just can’t seem to loose. Its method of killing, however, is perhaps the most humane of all animals, crushing their prey with  immense force, ending its life in a single second. Even pursuits are quite rare with this shark. Ranging from 15 to 20 feet and weighing up to 2.5 tons, this is one of the largest fish in the world and is the only direct descendant of the megalodon. It mainly dines on smaller fish, dolphins, and a few seabirds(4).

Hammerhead: This shark ranges from 3 to 19 feet in length and weighs anywhere from 6 to over 1,000 pounds. It lives in a school during the day, unlike most sharks, but then hunts alone at night. The distinctive hammer-like shape of its head allows it a complete 360° view of its surroundings, but can literally be used as a hammer for stunning small fish and rays, on rare occasions. Perhaps the hammer’s most useful implication though is that, like all sharks, the pores in this shark’s head lead to sensory systems in the brain that detect the electricity given off by other organisms, and by spreading those pores out, the hammer shape creates something similar to an antenna. This particular shark eats squid, octopus, smaller fish and sharks, and they especially enjoy stingrays(5).

Natal Shyshark: The shyshark can reach up to 20 inches in length and sports a dark/light brown back with very small white dots. They received their name because of their tenancy to curl up and cover their eyes with their tail whenever they feel threatened(6).

Whale shark: With a lifespan of over 70 years(7), the whale shark weighs up to ten tons and averages at about 32 feet in length, although some researchers claim to have seen some ranging up to 69 feet long. These fish are a red/brown color with many white spots across its back. This shark lives in warm tropical waters, such as the Philippines, and (surprisingly enough) eats only plankton(8).

As mentioned before, these sharks are all endangered on some level and a few reasons exist for this. The primary issue is over-fishing. Shark Fin Soup is a delicacy is many countries and cultures but wreaks havoc upon the species that are favored for these recipes, such as the great white and the hammerhead. In addition, as with most marine animals, fishing endeavors can spell disaster for individual sharks whenever nets are involved. Hammerheads are perhaps at the most danger when it comes to fishing nets, as one could imagine, due to the odd, protruding shape of their heads. The only other major threat to these creatures is the recent rise in ocean temperatures, as sharks are extremely particular about their habitat and require very specific conditions.

The Importance of the Shark

As is the case with all predators, the shark is vital to its ecosystem because of its standing in the food web. Without the great white, for example, seal populations would skyrocket. You may be thinking that this doesn’t sound too bad since seals are extremely cute, but consider what would become of certain penguin populations if seals became too common. The shark is another vital link in the food chain that can not be allowed to break.

The main ways in which we can help is to simply be responsible with our consumption of products that may affect sharks (such as fin soup or other fish that are caught with nets in shark habitat), “adopting” a whale shark through the World Wildlife Fund, and, of course, making donations and contributions to organisations such as WWF. Many of us find sharks to be terrifying, blood-thirsty creatures but this is not true at all! Yes, some of them look a bit sinister but humans are nowhere near being listed as their intentional diet, and many, if not most, shark breeds are actually extremely docile and some are even borderline cute! That was our reason for using the four species that we did. Great whites and hammerheads tend to look pretty mean and… well hungry, whereas whale sharks are incredibly docile and shysharks, in my own opinion, are actually kind of cute. I hope that this diversity in our book’s cover has shown us just how different its pages might be. Just know that these aren’t monsters sent as a punishment from the gods, but are instead scared inhabitants of earth, just hoping to live another day. 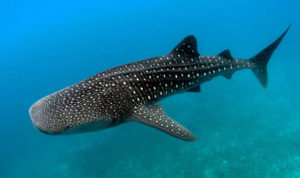